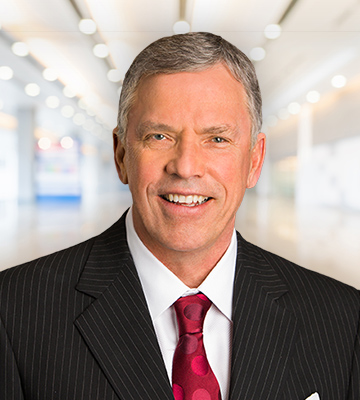 "We let our clients know that the key to success, financially and emotionally, is learning to operate as a divorced couple rather than a married couple. The rules as you once knew them no longer apply."

Rick Robertson’s family law clients are high net-worth individuals, A-level executives, pro athletes, entertainers and their spouses, but he never mentions their names and actions. His policy and that of KoonsFuller, P.C. Family Law is one of discretion. He respects the privacy of his clients above all else.

Rick Robertson is one of Collin County’s best-known divorce attorneys.

Rick Robertson has been voted by his peers in D Magazine (2003-2019) as one of “The Best Lawyers in Dallas and Fort Worth.” He is also listed in a recent issue of The Best Lawyers In America and has been included among the best in his profession each year since 1997. He is Board Certified in family law by the Texas Board of Legal Specialization.

Mr. Robertson came to the family law firm after many years with the largest law firm in McKinney, Texas. He was raised in Austin and attended the University of Texas for both his undergraduate and law degrees.

Rick Robertson has written articles and made presentations on family law issues to local, state and national bar associations.

In 2011 he was the first family attorney to appear on the cover of Super Lawyers. His article, written by Paul Sweeney covered Family Law in the Age of Facebook. An excerpt is included here: “Call her Ms. Smith. She was single, fun and interested in men, she declared on her Facebook profile. Photographs on her page depicted her canoodling with her latest boyfriend at a Dallas cocktail lounge. A Budweiser sign is prominently displayed overhead. But for Rick Robertson, the family law attorney who was representing her soon-to-be ex-husband (call him Mr. Smith) in a divorce and child-custody dispute, Ms. Smith’s Facebook postings afforded a Perry Mason moment. Until then, Ms. Smith had successfully been denying her husband full visitation rights with his infant son on grounds that he was “abusive and had alcohol issues…” Read the full article

He also offers commentary on a wide variety of subjects to Metroplex radio stations.  For Dallas radio station KLIF, Rick Robertson has commented on the uses of Facebook in court; what divorcing people need to know at tax time; and the situation of crowded family courts throughout the state. He was also interviewed on ABC Radio about international child custody laws.

Rick Robertson appears regularly on local Dallas-Fort Worth television. He appeared on KTVT News 11 in Fort Worth and on Good Morning Texas on WFAA-TV in Dallas to talk about the dangers of Facebook and other social media and their use in family law and divorce cases. See the WFAA-TV video here.

Rick Robertson also speaks to church and civic groups on staying married and the many challenges that face those who decide to divorce.

“We always offer clients the possibility of saving their marriages,” he says. “We don’t need to drum up business, and we would much rather see people get their lives in order. But if a divorce is inevitable, we are zealous advocates for them.”